Self-Help Homes Celebrates our first group in Hurricane! Congratulations to the nine families who recently moved into their homes.

HURRICANE —It was a joyful day for nine families that gathered Tuesday for a ribbon-cutting and open house, celebrating a job well done before moving into brand-new homes. They are pioneering residents of a community called Hurricane Heights, under construction in Hurricane with the help of Self-Help Homes.

It’s been a rewarding but arduous process for the newly minted homeowners. Applicants should make around 80 percent of the average median income, a figure that in Hurricane is in the $40,000-$50,000 range and have both good credit and low income-to-debt ratio. Once enough families have qualified, construction begins on land Self-Help Homes has acquired, funded in part through money the United States Department of Agriculture allocates for affordable housing projects in rural areas.

It’s the epitome of “sweat equity.” Participating homeowners show commitment, bond with future neighbors and help earn their homes by working with a group of families, usually 7 – 10, to build each other’s houses.

The project typically runs from eight to 10 months, with each family contributing 35 hours per week of labor until every home in the subdivision is built. Participants put in about 1,200 hours in all, and undertake 70 percent of the build under the the guidance of a Self-Help Homes construction superintendent. This includes framing, sheeting, putting up drywall, painting and installing cabinets and flooring. 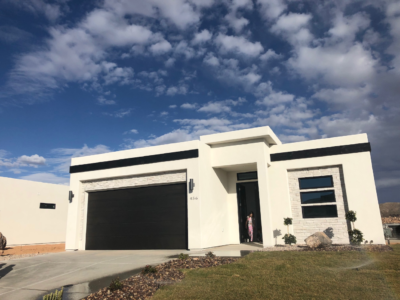 New homeowner Sarah Spencer spoke about the experience to a crowd gathered around one of the house’s attached garage. She said when she and her husband Alex found out about Self-Help Homes about three years ago, they initially balked.

“We thought, that’s really cool but who in their right mind would do that?” she said. “And as home prices started to go up in Southern Utah, we noticed we had one of two options. We could either do Self-Help homes or we could move.”

“They’re just priced out of the market and their options are pretty slim,” she said. “So we are so grateful that we didn’t move, that we stayed here and did this program … It was a real blessing to be able to work with amazing families, build these relationships and just make a really wonderful neighborhood that we’re proud to be a part of.”

Self-Help Homes executive director and founder Brad Bishop also spoke, as did Hurricane Mayor Nanette Billings. She said she’d reflected on the idea of Self-Help Homes while preparing her remarks.

“You think about self-help and, that’s really what it is,” she said. “It’s growing together learning together and doing things that are really hard … I’m going to say, being a mayor is really hard. Because I was a mom at home, and I’ve had to really learn a lot.

Billings said she’d met a woman a few moments earlier who said she wanted to get involved with the program.

“And so, I’m really excited about new people hearing about Self-Help Homes and being able to start another area in our community right away, because we have more people that are in desperate need of this. Welcome to Hurricane. Welcome to this neighborhood.”

Then members of the new community crowded into the garage, fenced in by a red ribbon that a resident was encouraged to snip with oversized scissors. The ceremony over, attendees were free to tour the houses. Boxes of booties that visitors could don over their shoes were placed near the community’s front door, allowing guests to peek at a piece of the American dream without dirtying the owners’ fresh carpets and clean floors.

Construction has already begun on seven more houses on the same street neighborhood, which should be finished in summer, Bishop said. Phase three will then begin with one of two groups that will build in a subdivision one street over. Applicants are still being accepted for the project in Hurricane.

In an interview after the ceremony, Bishop said he doesn’t really like the term low-income to describe the families he works. A surprising number of people fall into the category, especially given inflation and escalating house prices.

“They (our participants) are really a lot of the workforce in every city,” he said. “There’s a lot of management, a lot of self-employment. I know in this group we have teachers, including a seminary teacher, and school workers. We’ve got a lot of public employees as well, just all across the gamut.”

After 22 years at the helm of the nonprofit, Bishop said he still never gets tired of the celebrations they hold after each build.

“The open house is actually what recharges us every time,” he said. “You can just see the outcome on the people’s faces, and the confidence it builds in each of the families. And they own a home.”