Couple’s ‘sweat’ gets them home 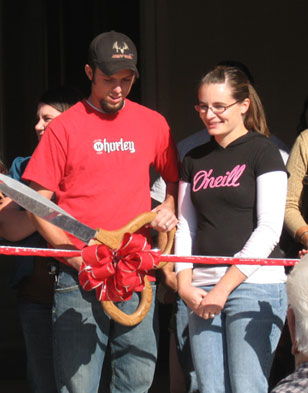 SANTAQUIN – “Sweat equity” gained new meaning as Adam Korb attempted to use a staple gun. When he first began building houses, he was a bit frightened by the tool’s power and the distance it can shoot staples. Now, he can practically handle a staple gun in his sleep. “I learned the staple gun can be your friend,” he said jokingly. Korb and his wife, Sarah, are ready to move into their new home–their first– made possible with help from a Provo-based nonprofit company and a U.S. Department of Agriculture Rural Development program. The Korbs did not have a down payment for the home so were required over the past 11 months to work 30 hours a week on the construction of their house in Sanataquin’s Cottonwood Estates subdivision and on seven others in Santaquin and Payson. The so-called sweat equity in each house is worth about $30,000 and lowered construction costs. The loan for each 1,320-square-foot house (with unfinished basements) was about $135,000. Brad Bishop, executive director of Rural Housing Development Corporation, said house-hunters probably  won’t find a comparable new home that cheap in southern Utah County. Older houses can be purchased in that price range, but they often require pricey improvements and maintenance. Bishop’s nonprofit helps people earning 80 percent or less than an area’s median income to purchase a house. Most of his clients are your families. In Utah County, a family of four earning $45,100 or less can qualify. Groups of six to 12 families close on their mortgage loans at the same time and are expected to help each other on their houses over the next 12 months. They roof, frame, paint, landscape and install cabinets. “The quality of the work is probably higher than some of the professionals,” said Paul Fanzen, who supervises the construction of each house. “They care. They take their time and are not pressured like some homebuilders.”  None of the 89 homeowners that Bishop’s group has helped has defaulted since the program began in Utah County in 2000. Bishop believes that’s because people have worked so hard on their homes. “The major loan is through USDA,” Bishop said. “They’ll close it at a normal (interest) rate but the payment can adjust with their income down to 1 percent.” For example, an $850 monthly mortgage payment could go down to about $500 a month,” Bishop said. And interest can be deferred.  Without the program the Korbs doubt they would own a house because they didn’t have a cash down payment. “We probably wouldn’t have even tried,” Adam Korb said. “We would still be living in our apartment.” The houses are located in places the federal government has designated as rural.  In northern Utah County, it’s the areas west of the Jordan River.  In southern Utah County, it’s ares south of the Spanish Fork river. “We’re starting our urban program through Fannie Mae,” Bishop said.  Urban houses will be located in Provo and Orem, he said.